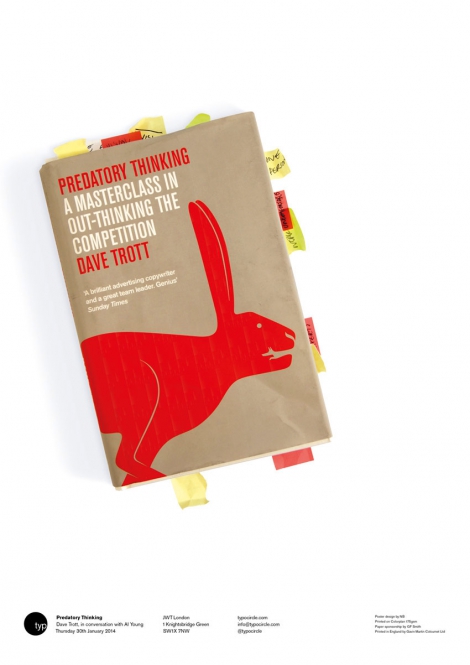 The legendary creative Dave Trott; the man responsible for some of the most memorable ads of the last 30 years is back by popular demand.

The night will take there form of a Q&A session; compered by Al Young, Executive Creative Director and Founding Partner of ad agency St Luke’s. Al will be grilling Dave on his illustrious career and taking questions from the audience.

Dave Trott’s work has influenced popular UK culture several times over. Winner of the 2004 D&AD President’s Award, Dave graduated from the Pratt Institute in New York, majoring in Advertising before going to work on Madison Avenue. Since then Dave has founded several of his own agencies including GGT and Bainsfair Sharkey Trott. He is now Executive Creative Director at The Gate London.

He is the author of every advertising graduates favourite book How to get your first job in advertising and Creative Mischief; reviewed by The Sunday Times as “genius”. His latest book, Predatory Thinking: A Masterclass in Out-Thinking the Competition draws upon powerful strategies for how to out-think the competition.

Two explorers are walking through the jungle. Suddenly they hear a tiger roar. One explorer sits down and takes a pair of running shoes out of his backpack. ‘You’re crazy, you’ll never out-run a tiger,’ says the other explorer. ‘I don’t have to out-run the tiger,’ he replies. ‘I just have to out-run you.’

His acclaimed blog posts for Campaign magazine and the The Gate London website have become must-reads for those aspiring to a career in advertising.