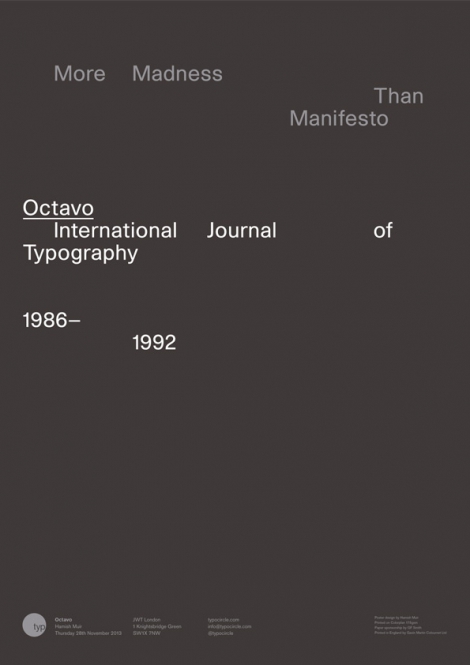 Hamish Muir co-founded the design studio 8vo with Mark Holt and Simon Johnston in 1985. Over six years from 1986, together with Michael Burke, 8vo edited, designed and published the highly influential journal ‘Octavo’ in an edition of 3000, distributed to an international audience via subscription and bookshops worldwide

“Never intended as a marketing tool for the studio (in fact it was more of a hindrance than a help with both current and prospective 8vo clients), Octavo was a project with serious intent. More madness than manifesto; a labour of love that had to get done in the evenings and at weekends. But looking back at the project, the biggest mystery is why the hell as 8vo, an unknown startup, we thought we had any place to set ourselves up as editors and publishers of a typographic journal. I suppose we were too young to be fearful of the scale of the project, but most of all we were fuelled by a shared antipathy towards the then typographic trends evident in the London design ‘scene’“

In his talk, Hamish will cover the starting points for the project within the context of British design in the mid 1980s; the reasons for designing Octavo to self-destruct after eight issues; balancing the expectations of the journal’s audience with content-appropriate form; the journey from mechanical artwork to in-position film setting and beyond. He will show working mock-ups for the journal and subscription cards, the ‘visual engineering’ specifications for the notorious ‘Is it possible?’ spread (from issue 7) as well as a rarely seen reconstruction of part of the now obsolete final issue, published as an interactive CD-ROM in 1992

Since closing 8vo in 2001, Hamish has worked on numerous editorial and type-based projects, taught part-time at the LCC and more recently he co-founded Outcast Editions, a publishing company specialising in interactive design and architecture books for iPad

In 2010, with Paul McNeil, Hamish co-founded MuirMcNeil, a project-based collaborative whose activities are focussed on exploring parametric design systems.