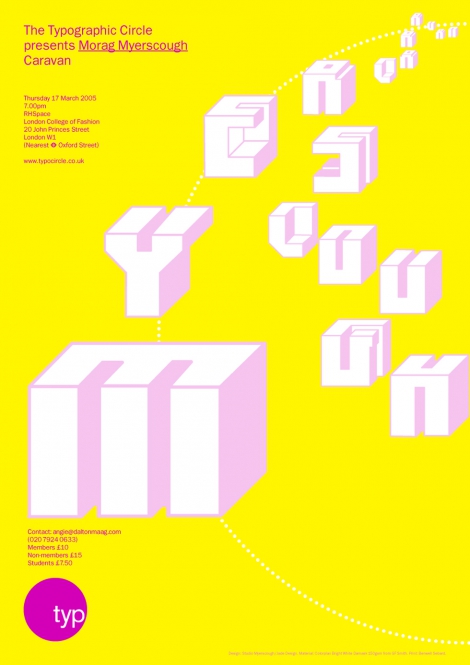 Designer Morag Myerscough started the award-winning Studio Myerscough in 1993. Best known for their work in the integration of graphics within architectural settings, acclaimed projects include Westminster Academy, the Kentish Town Health Centre and the Barbican Arts Centre. Myerscough believes that letter forms are amazing, expressive and beautiful.

Over the years Morag has concentrated on working way beyond the restrictions of 2D and creates and curates many different types of work including a train as a café, exhibitions, interpreting buildings and running her own gallery and shop.

The studio’s “Power of Ten” project for the London College of Communication was nominated for the 2010 Brit Insurance Designs of the Year. In 2012 Myerscough completed the new Zynga headquarters building in San Francisco.

Myerscough believes that wayfinding is not purely about a series of signs but as much about bringing out the narrative in the built environment, enhancing the physical experience, “It is very important how people feel when they move through a space, if they can move easily, almost unconsciously, and if you can make them smile and feel happy that is one of the best outcomes.”